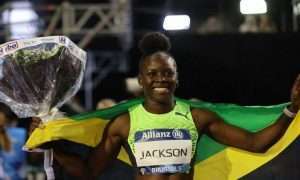 Jackson came from behind to out-dip her compatriot and long-standing rival, Shelly-Ann Fraser-Pryce, to give the five-time world champion her first defeat for the 2022 track and field season.