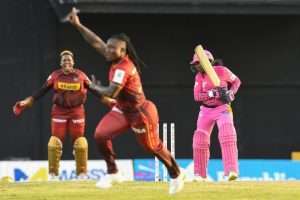 (CPL) – The Trinbago Knight Riders Women edged to victory by the barest of margins beating the Barbados Royals Women by one run in a nail-biting first game of the inaugural Massy Women’s Caribbean Premier League (WCPL).

Having won the toss and elected to bat, the Knight Riders got off to a flyer, but lost regular wickets meaning they finished 114/7 thanks to a late flurry from Hayley Jensen and a well-fought 30 from Lee-Ann Kirby at the top.

Shakera Selman and Hayley Matthews were the pick of the Royals’ bowlers taking two apiece and Matthews claimed bragging rights by dismissing her counterpart, Deandra Dottin.

The Royals also lost regular wickets during their chase and despite 38 from Chloe Tryon, an innings that included huge sixes, could not keep up with the run-rate.

Kirby added to her batting prowess with two important wickets and was integral to the Knight Riders taking the win, but it was captain Dottin in the final over that sealed the victory and all-but booked them a spot in the final.

Kirby and Natasha Mclean started the Knight Riders’ innings strongly before McLean was dismissed for 7 by Grimmond and Kirby’s run-a-ball 30 came to an end at the hands of young Fatima Sana.

When the partnership of Sune Luus and Deandra Dottin was broken, the Royals knew they were in with a chance of keeping the scoring to a minimum and when Matthews, with a heavily strapped right elbow, dismissed Dottin for 20, the Knight Riders suddenly found themselves 80/4.

They made it past 100 and strong hitting from Jensen, including a 66m six off Matthews, saw them finish 114/7.

Matthews and Aaliyah Alleyne both made starts at the top of the innings. The pair raced to 29 before Matthews was caught off Jensen, She was soon followed by Boyce at the hands of the Geetika Kodali, the hat-trick hero from the SKYEXCH 6IXTY.

The asking rate continued to rise with Tryon and Cooper at the crease and, after 10 overs, Royals needed 69 from 60 with seven wickets in hand.

Tryon took matters into her own hands as she took on Kirby and smashed her for three sixes in an over as she made a dent in the run chase in the 15th over. But a short-pitched delivery in the same over found an outside edge and she had to go for 38.

At 88/5, the Royals were in all sorts of trouble and the introduction of Anisa Mohammed added to their woes when Chinelle Henry played on and had to go for 12 leaving the Royals 91/6 after 17.

The excitement ramped up when captain Dottin took the ball for the over with the Royals 104/6 and needing 11. She cleaned up Fletcher with the first delivery and had Knight Riders’ fans believing that had all-but sealed the victory.

But Qiana Joseph, at just 21-years-old, and having not conceded a boundary off her own bowling, dispatched the World Boss back over her head to make the equation five off three.

With five needed, Dottin couldn’t find her line and sent down a wide to make it four needed off two and a real nail-biter. To add to the drama, Qiana then slipped as she played her shot and Sana, who had set off for the run, was nearly run-out.

Qiana, knowing they needed a boundary to win, swung with all her might at the final ball, but couldn’t get the elevation or distance and the Royals fell one run short.

Both teams still have one game to play in the hope of qualifying for Saturday’s final.