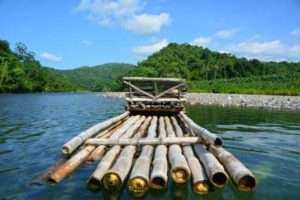 (JAMAICA OBSERVER) – River Raft Limited, the operators of rafting on the Martha Brae and Jamaica Swamp Safari Village in Trelawny, has distanced itself from a viral video of an alleged raft captain engaging in sexual relations with a female guest.

In the footage, which some have dubbed ‘The Martha Brae Special’, the man can be seen attempting to penetrate the woman as she lies on the raft.

The woman then requests a plastic bag to use as ‘protection’.

“Dem nasty. Dem not even know if each other have disease. Ole crowbait dem,” another social media user posted.

River Raft Ltd says it is appalled by video and has advised that its company is “in no way associated” with the footage.

“Rafting on the Martha Brae prides itself on providing nothing but excellent service to the many clients we host daily. Our complement of over 90 licensed raft captains are highly professional and take immense pride in their work,” their statement read.

“We wish to unequivocally disassociate River Raft Limited and Rafting on the Martha Brae from this outrageous video.”

The company says it does not offer limestone massages as part of its tour, nor is the activity sanctioned by the company.

Several social media have alleged that raft captains are selling ‘sexual favours’ to guests as part of massage packages.