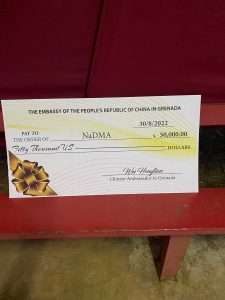 PR – The People’s Republic of China donated US$50,000 to the National Disaster Management Agency (NaDMA) at a special handing over ceremony on Tuesday 30th August, 2022 at the Vole Playing field Windsor Forest, St. David.

Presenting the Cheque to the Prime Minister and Minister of Disaster Management Hon. Dickon Mitchell was the Chinese Ambassador H.E. Wei Hongtian.

Addressing the gathering on the reason for this timely donation, Ambassador Wei spoke of the recent severe weather experienced on island and the damage sustained by many and used the opportunity to remind those in attendance of the importance of building resilience and sustainable mitigation mechanisms to protect and preserve our way of life and investments.

Accepting on behalf of NaDMA with a deep sense of gratitude, Prime Minister Hon. Dickon Mitchell described the gift as a thoughtful gesture in coping with the impact of climate change and the threats that we face.

“As we enter the month of September, I think we know what we experienced eighteen years ago and then in July 2005 and so we cannot afford to take for granted the reality that hurricanes are a clear and present danger to our way of life and indeed our existence”, Prime Minister Mitchell said.

The cheque handing over formed part of a two-part ceremony which also included the official lighting of the Vole Playing field, a community development initiative also funded by the Chinese government.