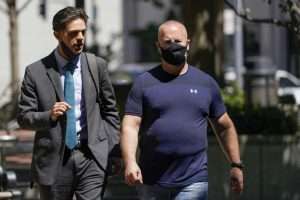 (AP) – Behind a closed chapel office door inside a federal women’s prison in California, a chaplain forced inmates seeking his spiritual guidance to have sex with him, exploiting their faith and their powerlessness behind bars for his own gratification, prosecutors said.

James Theodore Highhouse was sentenced Wednesday to seven years in prison — more than double the recommended punishment in federal sentencing guidelines. US District Judge Haywood S Gilliam Jr said the guidelines, which call for a sentence of less than three years, “seriously underestimate the seriousness” of Highhouse’s conduct.

“It’s hard to come up with the right words to describe how egregious an abuse of these victims this was,” Gilliam said.

Highhouse is among five workers charged in the last 14 months with sexually abusing inmates at the Federal Correctional Institution in Dublin, California, and the first to reach the sentencing phase of his case.

Highhouse, wearing a T-shirt and blue jeans, spoke briefly in federal court in Oakland and apologised to the women he harmed. Gilliam ordered him to begin his prison sentence on November 2, allowing him to remain free on bail until then. Highhouse must register as a sex offender once he’s released from prison, Gilliam said.

Highhouse, who was arrested in January and pleaded guilty in February, would tell women he abused at the Bay Area lockup, that everyone in the Bible had sex and that God wanted them to be together, prosecutors said.

While Highhouse, 49, was charged only with abusing one inmate and lying to authorities, prosecutors say he engaged in predatory conduct with at least six women from 2014 to 2019 — including one he counselled at a veterans hospital where he worked before joining the federal Bureau of Prisons, where allegations were routinely ignored.

Highhouse, enabled by a toxic culture of abuse and coverups at the prison, warned victims not to report him, telling one of them “no one will believe you because you’re an inmate, and I’m a chaplain,” prosecutors wrote in a sentencing memorandum.

Prosecutors had sought a 10-year prison sentence. His lawyers asked for two years, the low end of the federal guidelines, which called for a sentence of 24 to 30 months. Gilliam’s seven-year sentence matched the recommendation of probation officers who conducted Highhouse’s pre-sentence investigation.

“Within our corrections system, chaplains are supposed to provide hope and spiritual guidance,” Deputy Attorney General Lisa Monaco said in a statement. “Instead, this chaplain abused his authority and betrayed the public trust.”

All sexual activity between a prison worker and an inmate is illegal. Correctional employees enjoy substantial power over inmates, controlling every aspect of their lives from mealtime to lights out, and there is no scenario in which an inmate can give consent.