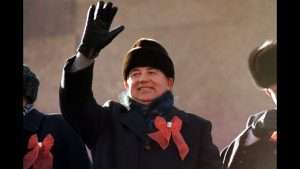 (AP) – Mikhail Gorbachev, who set out to revitalize the Soviet Union but ended up unleashing forces that led to the collapse of communism, the breakup of the state and the end of the Cold War, died Tuesday. The last Soviet leader was 91.

Gorbachev died after a long illness, according to a statement issued by the Central Clinical Hospital in Moscow. No other details were given.

Though in power less than seven years, Gorbachev unleashed a breathtaking series of changes. But they quickly overtook him and resulted in the collapse of the authoritarian Soviet state, the freeing of Eastern European nations from Russian domination and the end of decades of East-West nuclear confrontation.

US President Joe Biden called Gorbachev a “man of remarkable vision” and a “rare leader” who had “the imagination to see that a different future was possible and the courage to risk his entire career to achieve it.

“The result was a safer world and greater freedom for millions of people,” Biden said in a statement.

“Hard to think of a single person who altered the course of history more in a positive direction” than Gorbachev, said Michael McFaul, a political analyst and former US Ambassador in Moscow, on Twitter. “Gorbachev was an idealist who believed in the power of ideas and individuals. We should learn from his legacy.”

Gorbachev’s decline was humiliating. His power hopelessly sapped by an attempted coup against him in August 1991, he spent his last months in office watching republic after republic declare independence until he resigned on December 25, 1991. The Soviet Union wrote itself into oblivion a day later.

A quarter-century after the collapse, Gorbachev told The Associated Press that he had not considered using widespread force to try to keep the USSR together because he feared chaos in the nuclear country.

“The country was loaded to the brim with weapons. And it would have immediately pushed the country into a civil war,” he said.

Many of the changes, including the Soviet breakup, bore no resemblance to the transformation that Gorbachev had envisioned when he became Soviet leader in March 1985.

By the end of his rule, he was powerless to halt the whirlwind he had started. Yet Gorbachev may have had a greater impact on the second half of the 20th century than any other political figure.