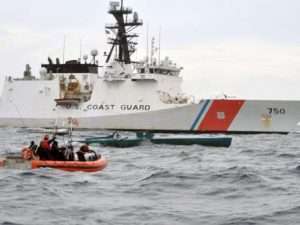 The Coast Guard said a rustic vessel was also stopped on Friday, about 64 miles south of Sugarloaf Key, Florida.

“Those rescued or stopped at sea will be repatriated back to their country of origin,” he added.

Since October 1, 2021, the US Coast Guard said its crews have interdicted 4,822 Cuban migrants.