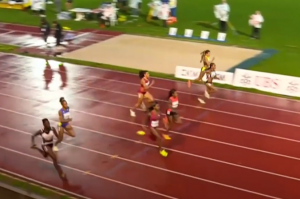 (AFP) – American sprinter Sha’Carri Richardson, who has not appeared in competition since the end of June, saw off Olympic champion Elaine Thompson-Herah to win the 100m at the meet in Lucerne on Tuesday.

On a wet track and sprinting into the wind (two metres per second), Richardson won in 11.29 seconds, just 0.01sec ahead of the Jamaican double Olympic champion Thompson-Herah.

It marked a major triumph for the 22-year-old Richardson — the 11th fastest woman of all time over the distance with a best of 10.85sec — after she failed to qualify for the world championships team at the US Trials in June.

It made for an American double in the sprints as Marvin Bracy, who won the silver at the world championships in Eugene in July, took the men’s 100m in 10.17sec, ahead of Kenya’s African champion Ferdinand Omanyala who clocked 10.18sec.