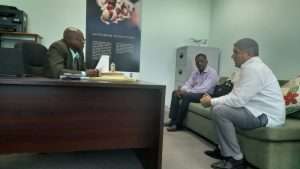 PR – Cuban Ambassador to Grenada  His Excellency Luis Ernesto Morejon Rodriguez today paid a courtesy call on Minister for  Tourism, Hon. Lennox Andrews to discuss areas of cooperation between the Government and  People of Grenada and Cuba.

It was agreed that a follow-up meeting will be held to finalize enhanced corporation in  Agriculture, Fisheries, Tourism, Infrastructure, and the Creative Arts, as well as other possible  areas, with the hope of signing a Memorandum of Understanding, which will form part of the  2023 Budget implementation process.

Minister Andrews says he recognizes first-hand, the contribution that Cuba is making to the  social and educational advancement of the people of Grenada and highlighted that three  members of the current administration are graduates of Cuban universities, Hon. Denis Cornwall,  Hon. Joseph Andall and himself.

An invitation was extended to Minister Andrews by the Cuban Ambassador to make an official  visit to Cuba to renew acquaintances as a Cuban University Graduate, as well as to explore other  areas of cooperation between the two countries.

Ambassador Rodriguez says Cuban professionals continue to provide meaningful service to the  people of Grenada with more than 40 doctors and 50 nurses at the General hospital, as well as a  number of engineers and other Civil Servants. He says Cuba is looking forward to contributing  even more to the tri-island.

April 14, 2022, marked the 43rd anniversary of the establishment of diplomatic relations  between Grenada and the Republic of Cuba.

Hon. Andrews says the Government of Grenada looks forward to an enhanced relationship and further cooperation between our two countries.