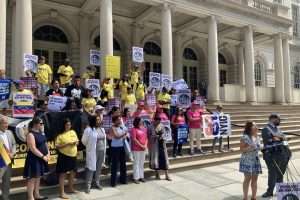 (CMC) – A coalition of immigration advocates, allies and elected officials are demanding that federal, state and city governments in the United States step up efforts to provide Caribbean and other asylum seekers being bused to New York City from Texas with the necessary services and support to ensure they are able to thrive there.

On Friday, the New York Immigration Coalition (NYIC), an umbrella organisation of over 200 immigration advocacy groups, spearheaded a rally on the steps of City Hall in lower Manhattan, making their demands known.

At the rally, NYIC launched the “Welcoming New York Campaign”, designed to “keep pressure on every level of government to ensure a quicker and more efficient response to the pressing needs of new arrivals.”

“It has been nearly a month since New York City called attention to the issue of Texas Governor (Greg) Abbott’s busing of asylum seekers to New York. While we have heard some righteous condemnation of Governor Abbott’s actions from our elected leaders, we have seen little in the way of a coordinated Federal, State, and City government response to meet the needs of new arrivals,” said Murad Awawdeh, NYIC’s executive director.

“Instead, the Mayor’s Office of Immigrant Affairs (MOIA) coordinated volunteers, mutual aid groups and organisations like ours to spring into action to fill the gaps with few resources. Now is the time for every level of government to develop a coordinated strategy that includes support for community groups like our member organisations that have both the trust and experience to help immigrants to successfully integrate and thrive in New York,” he added.

“As we deal with the influx of migrants bussed in by the xenophobic Governor of Texas, let us remember the wise words on the Statue of Liberty: ‘Give me your tired, your poor, your huddled masses yearning to breathe free,’” she said.

The campaign advocates that the US Department of Homeland Security provide funding for shelter and transportation, extend parole for asylum seekers, facilitate expedited work permits, and push Texas to ensure asylum seekers give informed consent before entering a bus and are provided with adequate food and medical care.