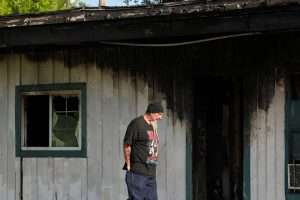 (AP) — A man evicted from a Houston apartment building shot five other tenants, killing three of them, Sunday morning after setting fire to the house to lure them out, police said.

The incident happened at about 1 a.m. Sunday in a mixed industrial-residential neighborhood in southwest Houston. Police and fire crews responded to the apartment house after reports of the fire, police Chief Troy Finner said.

The gunman opened fire on the other tenants as they emerged from the house, possibly with a shotgun, wounding five, Finner said. Two were dead at the scene, and one died at a hospital. Fire teams rescued two other wounded men, who were hospitalized with non-life-threatening wounds, he said.

The man then opened fire as the firefighters battled the fire, forcing them to take cover until police officers spotted the prone gunman and shot him dead, Finner said.

No identities have been released, and no firefighters or officers were wounded, he said.

“I’ve seen things I have not seen before in 32 years, and it has happened time and time again,” Finner said. “We just ask that the community come together.”