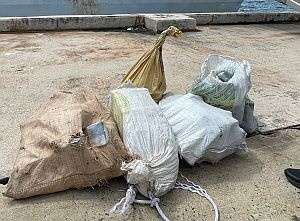 (CMC) – The United States Coast Guard says it has seized cocaine worth an estimated US$3.1 million and that eight men had been detained during the interdiction of a vessel near Puerto Rico on Thursday.

It said that the crew of the Coast Guard Cutter, Legare, and the Caribbean Corridor Strike Force seized 330 pounds of cocaine in the Caribbean Sea and that the eight men who claim to be Dominican Republic nationals are facing US federal prosecution here.

The US Coast Guard said the smugglers face federal charges of  conspiracy to possess with intent to distribute a controlled substance aboard a  vessel subject to the jurisdiction of the United States.

Lieutenant Commander Charles Wilson, commanding officer of the Cutter Joseph Doyle, said the interdiction is “an example of how successful interagency cooperation can be through the use of our collective resources.

“Customs and Border Protection (CBP) Caribbean Air Marine Branch (CAMB) and the Coast Guard worked seamlessly to detect and interdict this suspected narcotics trafficking operation before it reached the shores of Puerto Rico,” he said.