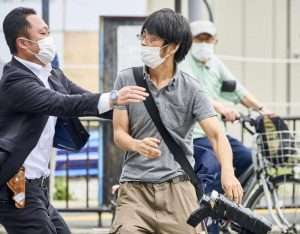 But there has been another surprise in the weeks since the murder as details have emerged about an alleged assassin who was well-off until his mother’s huge donations to the controversial Unification Church left him poor, neglected and filled with rage.

Some Japanese have expressed understanding, even sympathy, for the 41-year-old suspect, especially those of a similar age who may feel pangs of recognition linked to their own suffering during three decades of economic malaise and social turmoil.

Experts say the case has also illuminated the plight of thousands of other children of church adherents who have faced abuse and neglect.

There also have been serious political implications for Japan’s governing party, which has kept cozy ties with the church despite controversies and a string of legal disputes.

Prime Minister Fumio Kishida’s popularity has plunged since the killing, and he has shuffled his Cabinet to purge members with ties to the religious group. On Thursday, the national police agency chief submitted his resignation to take responsibility over Abe’s assassination.

Yamagami, who is being detained for mental evaluation until late November, has previously expressed on social media a hatred for the Unification Church, which was founded in South Korea in 1954 and has, since the 1980s, faced accusations of devious recruitment practices and brainwashing of adherents into making huge donations.

In a letter seen by The Associated Press and tweets believed to be his, Yamagami said his family and life were destroyed by the church because of his mother’s huge donations. Police confirmed that a draft of Yamagami’s letter was found in a computer confiscated from his one-room apartment.

“After my mother joined the church (in the 1990s), my entire teenage years were gone, with some 100 million yen ($735,000) wasted,” he wrote in the typed letter, which he sent to a blogger in western Japan the day before he allegedly assassinated Abe during a campaign speech on July 8 in Nara, western Japan. “It’s not an exaggeration to say my experience during that time has kept distorting my entire life.”

Yamagami was four when his father, an executive of a company founded by the suspect’s grandfather, killed himself. After his mother joined the Unification Church, she began making big donations that bankrupted the family and shattered Yamagami’s hope of going to college. His brother later committed suicide. After a three-year stint in the navy, Yamagami was most recently a factory worker.