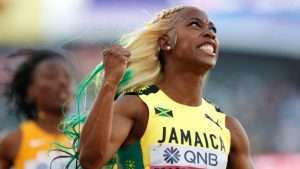 The sprinter made the announcement in a post to her Instagram stories on Friday, minutes before the race’s start.

Fraser-Pryce shared that she has been feeling some discomfort in her hamstring recently and revealed that despite her best efforts, the issue persists.

She explained that as a precautionary measure, her coach has decided against racing at this time.

“I’m extremely disappointed that I won’t be able to compete tonight and I’m sure you all are as well…No matter how hard we prepare sometimes, things just don’t go as planned. The last thing I want to do is gain an injury/injure myself.”

Fraser-Pryce was expected to face fellow Jamaicans Elaine Thompson-Herah and Shericka Jackson in their first showdown since sweeping the 100m race at the recently concluded World Championships in Eugene, Oregon.

Fraser-Pryce says she will be getting some treatment ahead of the Diamond League in Brussels, Belgium.