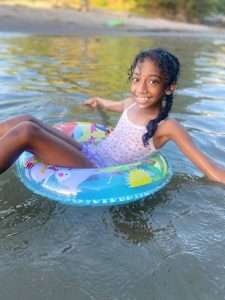 (TT GUARDIAN) – An 11-year-old school girl is dead after she was mauled by a dog at a relative’s home in San Fernando on Thursday morning.

Reports said Rachel Bhagwandeen, 11, of Fairview, Freeport and her brother Jaylon, nine, were watching television inside their uncle’s house along Solomon Street, Vistabella.

Around 11 am, one of their relative’s dog ran inside and attacked them.

Rachel told Jaylon to run and he alerted relatives.

However, they could not get the American Bulldog off the child until the owner arrived between 10-15 minutes later.

The child died at the scene.

Police are currently at the scene.