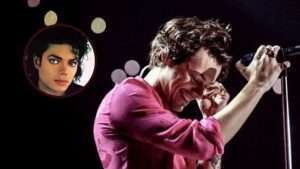 On August 22, the magazine announced that Harry Styles would be their cover star for October and November and deemed him the new king of the genre.

Harry Styles rose to stardom in 2011 as part of the One Direction group from England, before going solo.

But, fans of the late Michael Jackson, who is still regarded as the true King of Pop, are outraged at Harry Styles’ new title.

Jackson became known as the ‘King of Pop’ in 1989 when Elizabeth Taylor presented him with a Soul Train Heritage Award and called him the “true king of pop, rock and soul”.

Another said they were bewildered that Harry Styles was even being compared to Jackson.

“Being called the ‘new king of pop ‘while not even being close to what Michael Jackson was is sick, ” she said.

On Instagram, one fan commented that Rolling Stone should apologise for the disrespect to Jackson.

“You raggedy magazine. Do not ever play with Micheal like that. Even if the title was up for grabs, Harry Styles still couldn’t get it. Apologise now,” she posted.

Taj Jackson, the nephew of Michael, believes that the magazine’s publication is an attempt to undermine the legacy of his uncle.

“There is no new King of Pop. You don’t own the title Rolling Stone, and you didn’t earn it, my uncle did. Decades of dedication and sacrifice. The title has been retired. No disrespect to Harry Styles, he’s mega talented. Give him his own unique title,” said Jackson.

The Estate of Jackson has trademarked the phrase ‘King 0f Pop,’ which was used extensively about Michael both during his life and since his death.