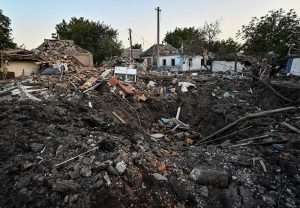 (AP) — The death toll from a Russian rocket attack on a train station and the surrounding area on Ukraine’s Independence Day climbed to 25, including at least two children, Ukrainian authorities said Thursday. Russia said it targeted a military train and claimed to have killed more than 200 Ukrainian reservists.

Meanwhile, Russian President Vladimir Putin ordered an increase in the country’s armed forces of 137,000 troops, or more than 13 per cent, by January 1. That would bring Russia’s troop strength to over 1.15 million.

The move appeared to be an effort to replenish forces that have sustained heavy losses in the Ukraine war.

The decree Putin signed did not say whether the increase would be accomplished by expanding the draft, recruiting more volunteers, or both.

Western estimates of Russian dead have ranged from more than 15,000 to over 20,000 — more than the Soviet Union lost during its 10-year war in Afghanistan. The Pentagon said last week that as many as 80,000 Russian troops have been killed or wounded, eroding Moscow’s capability to conduct big offensives.

The lethal train-station strike in Chaplyne, a town of about 3,500 in the central Dnipropetrovsk region, served as a painful reminder of Russia’s continued ability to inflict large-scale suffering six months into the war. Wednesday’s national holiday celebrated Ukraine’s 1991 declaration of independence from the Soviet Union.

The dead included an 11-year-old boy found under the rubble of a house and a six-year-old killed in a car fire near the train station, authorities said.

The deputy head of the Ukrainian presidential office, Kyrylo Tymoshenko, did not say whether all of the 25 people killed were civilians. If they were, it would amount to one of the deadliest attacks on civilians in weeks. Thirty-one people were reported wounded.