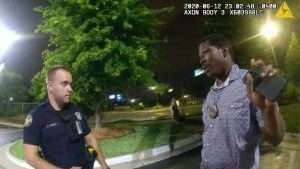 (AFP)— Two white Atlanta police officers will not face charges for the 2020 death of a black man who was shot twice in the back, a prosecutor said Tuesday.

Pete Skandalakis, executive director of the Prosecuting Attorneys’ Council of Georgia, said that after reviewing the evidence, charges were not warranted against the officers for the death of Rayshard Brooks.

The 27-year-old Brooks was shot dead on June 12, 2020, outside a fast-food restaurant in Atlanta after a struggle with officers Garrett Rolfe and his partner Devin Brosnan.

Brooks’ death came less than a month after that of George Floyd, a 46-year-old black man killed by police in Minneapolis, and added fuel to nationwide protests against police brutality and racial injustice.

Rolfe and Brosnan were responding to a report of a man sleeping in his car in the drive-thru line at a Wendy’s fast-food restaurant.

In an interaction that was calm for most of 40 minutes, they gave Brooks an alcohol test and, after it proved positive, sought to arrest him for driving under the influence.

After a brief struggle, Brooks fled with one of the officers’ Tasers and fired it at them as he was running away. Rolfe shot Brooks twice in the back.

“Given the quickly changing circumstances, was it objectively reasonable that he used deadly force?” Skandalakis said of Rolfe. “We conclude it was.”

“This is a case in which the officers were willing to give Mr Brooks every benefit of the doubt,” he said. “Unfortunately, by his actions, this is what happened.”

Skandalakis said charges against the officers would be dismissed.

In another high-profile case, a former Louisville detective pleaded guilty on Tuesday to providing false information to obtain a search warrant for Breonna Taylor’s home that led to a 2020 raid in which the black woman was fatally shot.

Kelly Goodlett admitted to conspiring with another ex-detective to “falsify a warrant affidavit for Breonna Taylor’s home” and to making “false statements to cover up the false affidavit.”

She faces up to five years in prison, a fine of $250,000 and three years of supervised release, the plea agreement says.

Goodlett and two other officers were facing federal charges for falsifying the warrant, while a fourth was charged with using excessive force by opening fire during the raid, which was part of a drug trafficking case against Taylor’s ex-boyfriend.

The 26-year-old Taylor and her boyfriend, Kenneth Walker, were sleeping in her apartment around midnight on March 13, 2020, when they heard a noise at the door.

Walker, believing it was a break-in, fired his gun, wounding one police officer. Police, who had obtained a controversial no-knock warrant to make a drug arrest, fired more than 30 shots back, mortally wounding Taylor.

The city of Louisville, the largest in Kentucky, settled a wrongful death suit with Taylor’s family for $12 million in September 2020.