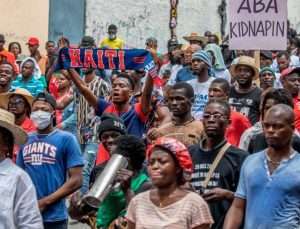 (CMC) – Prime Minister Dr Ariel Henry has condemned what he termed the “heinous crimes” taking place in the French-speaking Caribbean Community (Caricom) country, as Haitians took to the streets Monday, urging the Government to do more to ensure their security and social well-being.

In the latest incident, three women – a mother and her two daughters – were killed after they were caught in a shoot-out between rival gangs from Cité Doudoune.

A police report said their vehicle was riddled with bullets near the Rivière Grise Bridge in Tabarre in the commune of Croix-des-Bouquets, the bandits later setting fire to the vehicles with the bodies of the women inside.

The authorities also reported that three taxi-motorcycle drivers and two residents were also killed for being in the wrong place at the wrong time.

“I am revolted by the news of the assassination of several compatriots by armed bandits operating in Tabarre,” Prime Minister Henry said.

“The Government strongly condemns this heinous crime, while extending its sympathy to the relatives and friends of the victims. On behalf of the Government, I renew my firm determination to relentlessly combat insecurity. I instruct the police to continue the clubbing of the bandits in order to put them out of harm’s way,” he added.

Minister of the Interior and Territorial Communities Liszt Quitel said he is “stunned by the horror and violence of the crimes perpetrated, particularly over the past weekend.

“The ministry also remains concerned about the nuisance caused by armed groups, organised as real looters and highwaymen on the RN2, the RN1, at Canaan and Trou Sable on the RN3. Many citizens were blocked for hours during the day… while trucks of goods and building materials have been the prey to these outlaws until the intervention of the security forces.”

Quitel, said that several other users were also targeted, including Kesnel Normil, the acting principal mayor of Petion-ville, “whose vehicle came under numerous gunfire at Canaan.

“The minister presents his deepest sympathy to the parents, relatives and friends of those who died in this massacre perpetrated by armed bandits in Tabarre. It also expresses its solidarity with the victims of the attacks on the public highway,” he said in a statement.Canada’s Ambassador to Haiti Sébastien Carrière said the “abject violence that reigns in areas controlled by gangs is often anonymous.I’m heartbroken, like the whole country”.

The United Nations has said that between July 8-17, over 471 people were killed, injured or unaccounted for. It said serious incidents of sexual violence against women and girls, as well as the gang recruitment of boys, have also been reported.

Around 3,000 people have fled their homes, including hundreds of unaccompanied children, while at least 140 houses have been destroyed or burnt down.

Meanwhile, the Standing Committee of the Episcopal Church of Haiti, says it has relieved the Rev Father Frantz Cole of his responsibilities as diocesan executive secretary and priest in charge of the Parish of Our Lady of the Annunciation in Bolosse as the Central Directorate of the Judicial Police (DCPJ) continues its investigations into the seizure of a quantity of arms and ammunition concealed in a franchise container of the Episcopal Church of Haiti on July 14.

The priest is facing possible charges of trafficking in arms and ammunition, smuggling, tax evasion, tax evasion, illicit enrichment and laundering of assets from serious offences.

In a statement, the standing committee of the Episcopal Church, of Haiti, said its lawyer “will not defend any natural person, whatsoever, prosecuted rightly or wrongly, within the framework of this case.

“The church expresses the wish that the rights of Father Frantz Cole guaranteed by the Constitution of the Republic of Haiti, the international conventions ratified by Haiti and Haitian laws will be respected”.

The Episcopal Church of Haiti reiterates that it is not involved in “any illegal trafficking in firearms or ammunition or in any franchise trafficking” and “renews its firm determination to be a civil party in any trial to intervene in the context of this case.

“Furthermore, the police authorities wanted the collaboration of our church to shed light on the case of importing firearms and ammunition in which the name of our church was unfortunately associated. The church has renewed, on occasion, its will to collaborate with the police, judicial and administrative authorities so that all the light is shed on the question”

The standing committee confirms that the law firm Madistin, which defends the church, following instructions, will send without delay to the DCPJ, as requested “all information relating to franchise applications submitted by our church to the Ministry of Worship with container numbers, arrival notices and other related documents for the last five years” as well as the “list of shipping agencies with which the church has worked for the past five years”.

In addition, the committee said that “movements of funds, accounting records and numbers of church bank accounts for the past five years; list of payroll and movement of diocesan office personnel [and] the letter terminating Vundla’s service as cooperating in the Diocese of Haiti” will also be sent to the police.