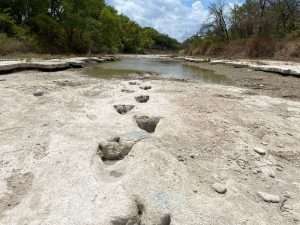 (AFP)— A drought in Texas dried up a river flowing through Dinosaur Valley State Park, exposing tracks from giant reptiles that lived some 113 million years ago, an official said Tuesday.

Photos posted on Facebook show three-toed footprints leading down a dry tree-lined riverbed in the southern US state. It is “one of the longest dinosaur trackways in the world,” a caption accompanying the images says.

“Due to the excessive drought conditions this past summer, the river dried up completely in most locations, allowing for more tracks to be uncovered here in the park,” she said.

“Under normal river conditions, these newer tracks are under water and are commonly filled in with sediment, making them buried and not as visible,” Garcia said.

Most of the recently revealed tracks were made by Acrocanthosaurus, which weighed nearly seven tons (6,350 kilograms) as an adult and stood 15 feet (4.5 metres) tall.

Another dinosaur, Sauroposeidon, also left tracks in the park. It measured 60 feet tall and weighed 44 tons in adulthood.

The state park — located in an inland area southwest of the city of Dallas — was once on the edge of an ancient ocean, and dinosaurs left footprints in the mud, its website says.

While drought revealed the tracks, rain is in the forecast, meaning they will likely be covered once more.

“While they will soon be buried again by the rain and the river, Dinosaur Valley State Park will continue to protect these 113 million-year-old tracks not only for present, but future generations,” Garcia said.