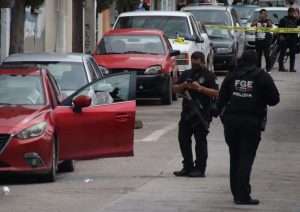 (AP) — A journalist who ran an online local news program was shot to death Monday in southern Mexico, making him the 15th media worker killed so far this year nationwide.

Prosecutors in the southern state of Guerrero said Monday that Fredid Román was gunned down in the state capital, Chilpancingo.

Román’s program, “The Reality of Guerrero,” focused heavily on state-level politics. He also wrote a column.

Guerrero is a state where drug gangs, armed vigilantes and other groups regularly clash.

2022 has been one of the deadliest ever for journalists in Mexico, which is now considered the most dangerous country for reporters outside a war zone.

Prosecutors did not immediately offer any further details on the killing of Román, who local media said had previously published a newspaper under the same name and was shot inside his vehicle.

The killing comes just one week after independent journalist Juan Arjón López was found dead in the northern border state of Sonora. Prosecutors said he died from a blow to the head. His body was found in San Luis Rio Colorado, across the border from Yuma, Arizona.

That area has been hit by drug cartel violence in recent years. In March, volunteer searchers found 11 bodies in clandestine burial pits in a stretch of desert near a garbage dump in San Luis.

At the beginning of August, a journalist was among four people killed inside a beer shop in the central Mexico state of Guanajuato.

Authorities said it was unknown whether that attack was related to the journalist’s work, his role as representative of local businesses in the planning of an upcoming fair or something else.

Jan-Albert Hootsen, the Mexico representative for the Committee to Protect Journalists, wrote after Arjón López’s killing that “although some arrests have been made in earlier cases of press killings this year, an ongoing climate of impunity continues to fuel these attacks.”