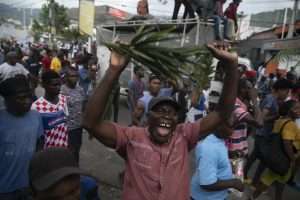 (AP) — Thousands of protesters in Haiti’s capital and other major cities blocked roads, shut down businesses, and marched through the streets Monday to demand that Prime Minister Ariel Henry step down and called for a better quality of life.

Associated Press journalists observed an unidentified man fatally shoot a demonstrator in Port-au-Prince and then flee in a car as the crowd temporarily scattered.

Demonstrator Lionel Jean-Pierre, who witnessed the shooting, said things in Haiti have gotten out of control.

“Families don’t know what to do,” he said as the crowd around him chanted: “If Ariel doesn’t leave, we’re going to die!”

Violence and kidnappings have surged in Port-au-Prince and nearby areas in recent months, with warring gangs killing hundreds of civilians in their fight over territory.

They have grown more powerful since last year’s assassination of President Jovenel Moïse.

In one of the most recent killings denounced by the prime minister and Haiti’s Office of Citizen Protection, suspected gang members killed eight people over the weekend in one community, including a mother and her two daughters who were set on fire while still alive.

“This collective crime adds to the list of victims…that has reached an alarming proportion,” the office said.

Poverty also has deepened, with inflation reaching 29% and the prices of some basic goods such as rice more than quadrupling. Gasoline also remains scarce and, if available, costs $15 a gallon.

“I need the gas to work,” 28-year-old moto-taxi driver Garry Larose said as he marched. “I have a family to feed, school to pay.”

In one protest, people wore black T-shirts, while at another they wore red T-shirts emblazoned with the words, “RISE UP.”

The protests come days after dozens of demonstrators staged a sit-in in front of Henry’s official residence and demanded that he resign.

On Monday, police clashed with demonstrators in some areas, firing tear gas to break up the crowd as burning tires blocked roads.