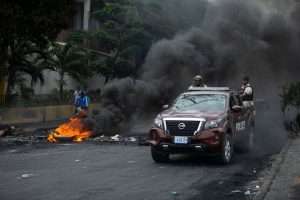 (CMC) – Haiti’s Prime Minister Dr Ariel Henry has condemned what he termed the “heinous crimes” taking place in the country, as Haitians took to the streets Monday, urging the government to do more to secure their security and social well-being.

In the latest incident, three women – a mother and her two daughters – were killed after they were caught in a shootout between rival gangs from Cité Doudoune.

Reports indicate that their vehicle was riddled with bullets near the Rivière Grise Bridge in Tabarre in the commune of Croix-des-Bouquets. The bandits later set fire to the vehicle with the bodies of the women inside.

The authorities also reported that three taxi-motorcycle drivers and two residents were also killed for being in the wrong place at the wrong time.

“I am revolted by the news of the assassination of several compatriots by armed bandits operating in Tabarre,” Prime Minister Henry said.

“The government strongly condemns this heinous crime, while extending its sympathy to the relatives and friends of the victims. On behalf of the government, I renew my firm determination to relentlessly combat insecurity. I instruct the police to continue the clubbing of the bandits to put them out of harm’s way,” he added.

Minister of the Interior and Territorial Communities Liszt Quitel said he is “stunned by the horror and violence of the crimes perpetrated particularly over the past weekend.”

Canada’s Ambassador to Haiti, Sébastien Carrière, said the “abject violence that reigns in areas controlled by gangs is often anonymous.

The United Nations has said that between July 8-17, over 471 people were killed, injured or unaccounted for. It said serious incidents of sexual violence against women and girls, as well as the gang recruitment of boys, have also been reported.

Around 3,000 people have fled their homes, including hundreds of unaccompanied children, while at least 140 houses have been destroyed or burnt down.