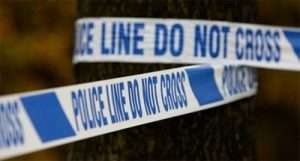 (TT GUARDIAN) – Pandemonium broke out in Morvant on Tuesday evening when two gunmen opened fire on a crowded basketball court, leaving two children, aged 9 and 11, seriously injured, with the nine-year-old boy fighting for his life at hospital after being shot in the head. The shooting incident also left one man dead and another wounded.

According to the police, around 6.40 pm, a car stopped at the entrance to the basketball court in Mon Repos and two gunmen emerged and began shooting in the direction of Morvant resident Eusibio Roberts and another man he was standing next to.

Police said as Roberts, 49, fell to the ground, the gunmen walked up and stood over him, continuing to fire.

One resident yesterday said, “When they done…his head was mash up…it had nothing, it was gone.”

A total of 31 projectiles were later recovered at the scene.

Roberts, a father of five, worked as a ward supervisor at the Eric Williams Medical Sciences Complex, Mt Hope.

The gunmen then turned and started shooting at Roberts’s friend, a 37-year-old unemployed man of Boundary Road, San Juan.

The man was shot in the chest but ran through the basketball court with the gunmen continuing their pursuit and shooting indiscriminately.

As the gunmen fled the area in the waiting car, residents who ran and hid ventured out and found a nine-year-old boy of Williams Avenue, Laventille Extension, Morvant, on the roadway bleeding from a gunshot wound to the head. An 11-year-old boy of Laventille Extension, Morvant, was also lying in a drain with a shot in the right leg. Both children were rushed for urgent medical care.

Yesterday, police said the nine-year-old boy remained in critical condition at the Eric Williams Medical Sciences Complex, Mt Hope. The 11-year-old, who is being treated at the same facility, was said to be stable.

When Guardian Media visited Mon Repos yesterday, the normally busy area was quiet and the streets devoid of children who would usually have been playing outside during the school vacation.

Playing cards were seen strewn on the ground where they had been dropped when the shooting began.

Some of the elderly men in the community declined to talk, preferring to sip their drinks as they watched carefully. A few went back inside their homes when approached by the media.

However, the relatives of the 11-year-old boy who was shot expressed their hurt and trauma about the incident. They asked for his name not to be released and also preferred not to reveal their identities.

They said the shooting incident was the second time gun violence had pierced their family.

In April 2019, relative Kareem Garcia, 27, an uncle of the injured boy, was killed during an alleged gang shooting at Thompson Lane, Morvant.

They said the trauma of having to scamper for safety during that incident came rushing back to the 11-year-old when he was taken to the hospital.

A male relative of the injured 11-year-old boy said it was normal for the children to be at the basketball court, as they were training for upcoming inter-community football matches.

Asked how the community felt, he said, “Is youths we talking bout…how we go feel again boy?”

He added, “Right now, the youths and them traumatised because they supposed to have a sports coming up and they don’t know if they want to come out.”

Pointing to the absence of people on the streets, he continued, “Right now they in they house.”

The shooting took place hours after acting Police Commissioner Mc Donald Jacob announced that additional police officers will be added to the patrol grid in five police divisions, in a bid to reduce gun and gang-related crimes.

The relative said change had to start in the home.

Another resident expressed anger that they had not heard from the authorities up to midday yesterday, as he questioned, “Why they ain’t offer counselling for these children? They scared and traumatised…what they waiting for?”

Officers from the Homicide Bureau were seen walking through the area and distributing flyers yesterday, appealing to residents to offer up any information which could lead to the arrest and conviction of the perpetrators.