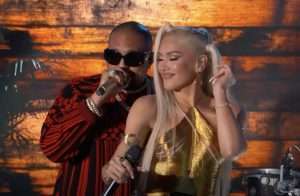 (JAMAICA OBSERVER) – Jamaican dancehall star Sean Paul will join television show ‘The Voice’ as the celebrity advisor to coach Gwen Stefani when the talent competition returns this September for its 22nd season.

The announcement was made on Wednesday with both entertainers sharing the news via social media.

Sean Paul in a post to his Instagram page said he was excited to be joining the cast of the Voice.

“So excited 2 b joinin #TeamGwen as her #BattleAdvisor on #TheVoice @gwenstefani,” his caption on IG read alongside a picture of himself and Stefani.

In the video reveal shared with her 14.4 million IG followers, Gwen Stefani gave three clues before disclosing her advisor would be the Jamaican music icon. Describing Sean Paul as “one of the most prolific Jamaican artistes ever” with “four number one hits and ten top 10 hits”, Stefani said she can’t wait to have the entertainer on season 22.

Sean Paul is expected to join the likes of Blake Shelton who selected country sensation Jimmie Allen to join his team for the Battle Rounds, John Legend who will have Grammy winning artiste Jazmine Sullivan as his advisor and new coach Camila Cabello who chose Charlie Puth to help as her team’s advisor.

Sean Paul and Gwen Stefani recently released their collaboration Light My Fire which also features Jamaican artiste, Shenseea. The single is featured on Sean Paul’s latest album, Scorcha which was released in May.

In an interview with Entertainment Tonight (ET), Stefani shared that although Light My Fire was the pair’s first official collaboration, their “souls knew each other.”

She said her love for Jamaican music goes far beyond her collaborations, as a member of rock group No Doubt, with dancehall heavyweights Lady Saw and Bounty Killer, adding that her admiration extends to the ska and reggae genres.

“I grew up loving ska music, which was, at the time, like, super underground. [There were] a lot of English groups like Madness, The Specials, and The Selecter, which led me into reggae music… And then, it’s just crazy to think that all these years later, I’m standing with a legend,” she told ET.