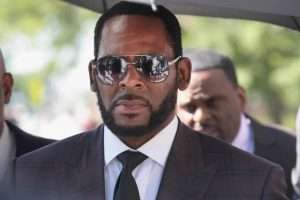 (AP) — R Kelly kept an ugly side of his life hidden as he escaped poverty in Chicago and rose to pop music stardom, a prosecutor told jurors Wednesday at the singer’s trial on charges accusing him of enticing girls for sex and rigging a 2008 child pornography case.

Kelly’s lead attorney implored jurors during her opening statement at the federal trial in Chicago not to accept what she said was the prosecution’s portrayal of her client as “a monster.”

Going back to the 1990s, much of the world knew Kelly solely by his hit songs, including the chart-topping inspirational anthem “I Believe I Can Fly,” US Assistant Attorney Jason Julien said. But “Kelly had another side … a hidden side, a dark side,” he added. “This trial is about Kelly’s hidden side.”

Kelly, who has denied any wrongdoing, has been trailed for decades by complaints and allegations about his sexual behavior. The scrutiny intensified after the #MeToo era and the 2019 six-part documentary “Surviving R Kelly” that detailed sex abuse allegations involving women and teenage girls.

Defense attorney Jennifer Bonjean told jurors that Kelly, in part because of intellectual challenges that included illiteracy, was forced to rely on others as his career took off and that he was sometimes led astray by those in his circle of associates.

“Mr Kelly can also be a victim,” she said.

A conviction in Chicago could add decades to a 30-year prison sentence he already received from a New York federal judge for charges that he used his fame to sexually abuse other young fans.

Sitting at a defense table as the prosecutor spoke, Kelly occasionally shook his head as Julien described Kelly manipulating and controlling girls — even beating them if they didn’t comply with strict rules that included calling him “daddy.”

Julien sought to give jurors a sense of the scale of Kelly’s alleged exploitation, saying he “repeatedly” had sex with girls who were just 14, 15 and 16 years old — “multiple girls, hundreds of times.”

He told jurors that the evidence includes at least three videos showing Kelly having sex with underage girls.

“We’re not going to play hours of child pornography and make you watch it,” the prosecutor said, explaining they would see excerpts. He added: “The videos are difficult to watch. But it is important to watch … to understand what happened.”

Later Wednesday, prosecutors entered into evidence video that was at the center of Kelly’s 2008 trial, but did not play any of it for jurors before court ended for the day. Prosecutors contend the video Kelly having sex with a girl no older than 14 when he was around 30.

“When the government wants to paint him as a monster … you remember we are talking about a human being,” Bonjean said.

She said jurors should not succumb to what she called “a mob justice climate” surrounding Kelly, alluding to “Surviving R Kelly” and years of harsh social media accounts of him.

“It is true that Mr Kelly is imperfect,” she said. “On his journey from poverty to stardom, he stumbled along the way.” But, she said, she was confident jurors would ultimately find him not guilty.

After jurors acquitted Kelly at his state trial in 2008, some later explained that they felt they had no choice because the girl did not testify. The woman, now 37 and referred to in court filings as “Minor 1,” will be the government’s star witness. During the trial, she will be referred to by a single pseudonym, “Jane,” in court.