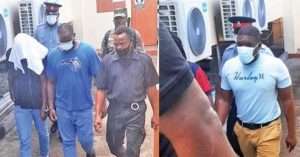 (TT GUARDIAN) – Four Trinidadians convicted of assaulting Grenadian national athlete, Anderson Peters on board the Harbour Master last week have been fined EC$3,500 (TT$8,792.53) each in a Grenadian court.

The rulings were handed down this morning.

Their convictions stem from a brawl onboard the Harbour Master party boat in Grenada last Wednesday.