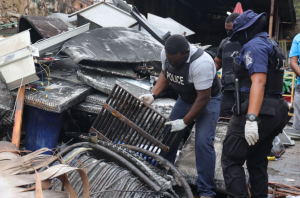 (TT GUARDIAN) – The Government has kept its promise and implemented a six-month ban on scrap iron and copper export. The move comes after a sharp increase in recent thefts of critical State infrastructures at WASA and TSTT facilities, dealing crippling blows to their ability to provide service to customers.

“It is a regrettable step that has been taken but it is a step that has been recognised that it has been affecting the livelihoods of ordinary people,” Attorney General Reginald Armour said as he announced the decision at a press conference at the Ministry of National Security if Port-of-Spain yesterday.

“What we have been experiencing in Trinidad and Tobago for the last, I think, four months, has been an escalation of an unlawful activity, series of activities in the field of what used to be and we expect and hope will continue to be, a legitimate and important industry in this country.”

Implemented since last Friday (August 12), the order will be in effect until February 28, 2023. It will now require exporters to apply for a license through the Ministry of Trade and Industry to ply their trade.

For the period of the ban, these applications, the AG said, will be vetted and approved by a Cabinet sub-committee comprising himself, Minister of Trade and Industry Paula Gopee-Scoon, Minister of National Security Fitzgerald Hinds and Minister of Energy and Energy Industries Stuart Young.

The ban is to arrest the issue in the short term, while the Government works out the necessary legislative framework to regulate the industry. However, Armour said they hope the full duration of the ban will not be needed.

“It is the hope that with the hard work of the Law Reform Commission and the Chief Parliamentary Counsel of the Office of the Attorney General, I can return to Cabinet within three months to put in place a legislative and regulatory system which will enable the ban to be shorter than three months because we will be building out a legislative, regulatory and enforcement process that will put an end to what is now a thriving illegal and illicit industry, which is crippling this country,” he said.

They will also update the fines for the existing legislation as part of the process.

“Part of what my ministry will be doing in the next three to six months is to review all of this legislation. We are looking at comparable legislation not in just Trinidad and Tobago, this old legislation, but in Barbados, Guyana, Jamaica and in the United Kingdom and the United States of America, to bring the 1904 and 1958 legislation which currently regulates this industry into the 21st century, so as to ensure persons who are then apprehended under that legislation will be met with much more serious penalties,” he said.

The fine for breaching the new measures under the current Old Metal and Marine Stores Act is $15,000 upon summary conviction.

Armour said stakeholders within the scrap iron industry will be consulted as part of the process.

“We are going to be inviting them to make recommendations to us on how they consider their industry should be regulated, so as to continue to be a lawful, thriving, remunerative industry,” he said.

On August 5 during a news conference, Minister Hinds said a six-month ban on the exportation of scrap iron was proposed and being considered in a bid to stop the theft of copper and other materials.

It was also during that news conference that Public Utilities Minister Marvin Gonzales spoke about the amount of money needed to repair the damage done to State infrastructure after vital material is stolen.

That news conference came days after thieves left TSTT customers in south Trinidad without telephone and internet services and also left Mayaro with no communication, after as hit on a site in San Fernando.

Defence Force soldiers were also ordered to patrol State utilities to prevent thefts and a $100,000 reward offered by the TTPS for information leading to the arrest of those responsible for stealing copper and metal from the State.