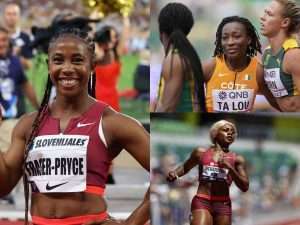 Fraser-Pryce, who won her fifth world title earlier this summer, has been on stellar form in the Diamond League with world-leading victories in Silesia and Monaco.

She is currently third in the 100m qualification standings, and will likely secure her place in the final when she competes in Lausanne on August 26th.

In Brussels, she will go up against 2019 Diamond Trophy winner Dina Asher-Smith, who will return to Diamond League action in Belgium after she attempts to defend her three European titles in Munich this week.

US sprinter Sha’Carri Richardson and Ivory Coast’s Marie-Josée Ta Lou will also be in the blocks in Brussels. Ta Lou is the only woman to have already locked down her place in the final, securing qualification when she stormed to a third-place finish and an African record of 10.72 in Monaco last week.

The Brussels Diamond League will be the 12th meeting of the season and the last chance for athletes to earn points in their bid to qualify for the Wanda Diamond League Final in Zurich on September 7-8.