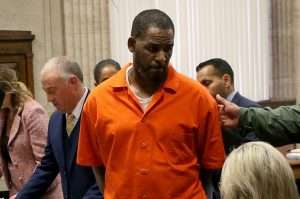 (AP) – Convicted sex offender R Kelly reportedly wants jurors who have seen the ‘Surviving R Kelly’ docuseries to be banned from his trial.

The artiste and his team reportedly filed a motion Monday to disqualify jurors who have seen any portion of the docuseries as his second federal trial begins in Chicago.

The request was made prior to the start of Kelly’s jury selection in Chicago on Monday.

According to reports, R Kelly’s team filed legal documents stating that “any potential juror who has watched any portion of this docuseries must be disqualified for cause on whether they can be fair, too great a risk exists that such a juror would base their verdict on matters not introduced into evidence in the courtroom”.

“No one, even a well-intentioned person, would be capable of purging his brain of information obtained through the docuseries or separating information learned from the documentary that was never subject to cross-examination from testimony introduced at trial on the same subject matter,” attorney Jennifer Bonjean wrote to US District Judge Harry Leinenweber.

About 100 potential jurors filled out questionnaires last week in the first steps to establish the jury pool at a federal courthouse in Chicago.

The 13 charges against the singer filed in 2019 include producing child pornography, enticing a minor to engage in criminal sexual activity, and conspiracy to obstruct justice.

In June, a New York federal judge sentenced R Kelly to 30 years in prison after he was found guilty of nine counts of sex trafficking and racketeering in September.