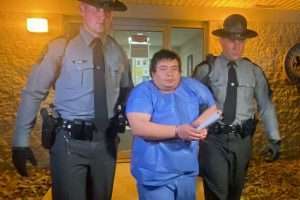 (AP) — Pennsylvania state police say a man who was upset about an argument with his mother drove through a crowd at a fundraiser for victims of a recent deadly house fire, killing one person at the event and injuring 17 others, then returned home and beat his mother to death.

Police identified the driver as 24-year-old Adrian Oswaldo Sura Reyes of Nescopeck, who was arraigned early Sunday on two counts of criminal homicide.

Police allege in a criminal complaint that Sura Reyes said he argued with his mother at their Nescopeck home Saturday evening and while driving through nearby Berwick was “extremely frustrated” and was “tired of fighting with his mother, including about money, and wanted to be done with it.”

At the time, police said, a crowd of about 75 people, including adults and small children, had gathered in a blocked-off parking lot in Berwick outside the Intoxicology Department bar, which was holding an all-day fundraising event to benefit victims of the August 5 blaze in Nescopeck that killed seven adults and three children.

Police say Sura Reyes told them he drove past the gathering, then turned around and headed back to the bar “to drive through the crowd of people.” Investigators asked how fast he drove into the crowd and Sura Reyes replied “speeding up.”

“Video surveillance gathered by the Pennsylvania State Police corroborates Sura Reyes’s statement that he sped up into the crowd purposefully,” according to the criminal complaint.

Geisinger Medical Center said it received 15 patients after the crash, and five remained in critical condition while three were listed in fair condition, a hospital spokesperson said Sunday morning. Seven patients had been treated at hospitals and released.

Trooper Anthony Petroski III told reporters late Saturday that Sura Reyes was not currently a suspect in the fire, the cause of which remains under investigation.

“This is a complete tragedy in a community where there’s already been tragedy,” Petroski said.

Shortly after the crash was reported, troopers were called about a man “physically assaulting” a woman less than two miles away in Nescopeck. Troopers arrived to find local police had arrested Sura Reyes and a woman was dead.

Luzerne County Coroner Francis Hacken confirmed Sunday that the victim, Rosa D. Reyes, 56, of Nescopeck, was the mother of Sura Reyes and had died of multiple traumatic injuries after being hit by a vehicle and assaulted with a hammer.

In the criminal complaint, police say Sura Reyes told investigators he saw his mother in the street upon returning home and struck her with his vehicle, then hit her with a hammer several times.

Sura Reyes was denied bail and remained in Columbia County prison pending an Aug. 29 preliminary hearing. News outlets reported that he said “Sorry” in response to reporters’ questions as he was taken from Shickshinny police station. It wasn’t immediately clear whether he had a lawyer to comment on his behalf.

The first funerals for victims of the fire were held Friday, and more were scheduled for Sunday and Monday.

The bar called the events an “absolute tragedy” and said on its Facebook page that they will be closed until further notice and would like privacy “while we grieve add try to process the events that occurred.”