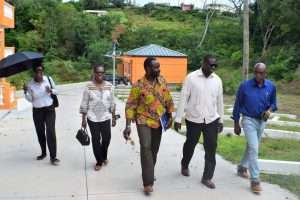 The Housing Minister, after having looked at some of the apartments, said that to make them comfortable for living, a number of retrofitting will need to be done. One area being examined is creating a laundry area. This, Hon. Telesford said, can be done through a public-private partnership.

He said that based on his government’s transformational agenda, they would like the beneficiaries to see the units as not only about finding a place to live, but also as an avenue to continue uplifting themselves.

The hope is that the houses will be released in December working closely with the Grenada Housing Authority.

Meanwhile, a visit was made to the Top Hill Senior Citizens Home to get an appreciation of its operations and needs.