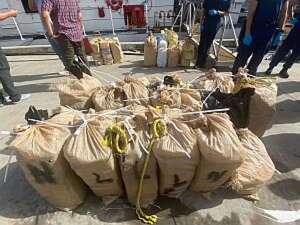 The Coast Guard said 14 nationals from the Dominican Republic, who were detained during the operations, are now facing US federal prosecution in Puerto Rico.

The seized drugs have an estimated wholesale value of approximately US$22 million, the US Coast Guard said, adding that these interdictions are the result of multi-agency efforts involving the Caribbean Border Interagency Group and the Caribbean Corridor Strike Force.

“I’m proud of the professionalism and performance of the cutter Joseph Tezanos in apprehending 14 smugglers and preventing these drugs from reaching the shores and streets of Puerto Rico,” he added.