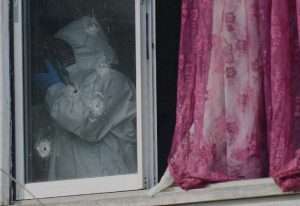 (TT GUARDIAN) – An 82-year-old woman was shot dead and her son wounded during a domestic incident which rocked a Moruga community on Wednesday.

The suspect, an 80-year-old close male relative, was later shot by the police and was in a critical condition at hospital last night.

For more than five hours, the body of Sylda Mudie remained in the house at Edward Trace, Basseterre Village, as the investigators processed the scene and awaited the arrival of the district medical officer.

Scores of relatives and neighbours gathered in front the house trying to make sense of what happened.

One relative muttered, “It was unexpected.”

Initial reports said that the woman and the suspect were arguing, following which he shot her with his licensed 16-gauge shotgun.

The suspect also chopped Mudie’s son Derek, 56, with a cutlass on his head. However, he managed to escape and get help from neighbours before being taken to the Princes Town District Health Facility.

When officers from the Moruga Police Station arrived at the house, they met the suspect standing next to a steel box in the yard in front of the house with a firearm next to him.

However, the man reached for the gun and the officers ordered him to stop. The suspect still picked up the firearm and as he raised it in the direction of the officers, they fired 11 shots at him.

The suspect, a gardener, was hit several times in his legs and chest.

The bullets pierced his lungs. He was warded under police guard at the Intensive Care Unit (ICU) of the San Fernando General Hospital up to last night.

Derek is also warded at that institution but was said to be in a stable condition last night.

Mudie’s body was found face down on the floor in the entrance between a room and living room, police said.

As undertakers were putting her body into the van to be taken to the mortuary, Mudie’s relatives began praying.

Mudie, a former lay-minister at the Catholic Church, was described by neighbours as a nice person.

Mudie, a mother of two and grandmother of one, was ailing. She and her son had only returned to the country on Saturday after visiting relatives in the United States.

Police confirmed Mudie had not filed domestic violent reports at the Moruga station.