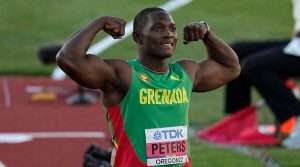 PR – In the early evening of Thursday 10th August, the St. David’s Track Blazers (SDTB) Inc.’s officials were alerted by bystanders of an altercation involving one of our club members –Anderson Peters, MBE, and his brother while attending a social activity.

The SDTB vehemently reproves such treatment of one of Grenada’s most successful athletes, but more so such treatment being meted out to a human being. Rest assured that we will support Anderson and his family throughout this ordeal and will continue to provide emotional, physical, and physiological support.

Finally, on Anderson’s behalf, we thank the public for your expression of concerns and support. We urge you to exhibit a great level of emotional intelligence during this time and allow for the rule of law to take its due course.

Thank you for your continued support