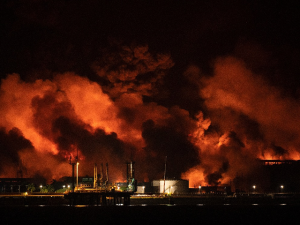 (CMC) – The Organisation of Eastern Caribbean States (OECS) on Tuesday extended “sincere condolences” to Cuba in the wake of the “unfortunate incident involving an enormous fire at an oil storage facility in the province of Matanzas” last weekend.

Flames have since engulfed a fourth tank at the oil storage facility in western Cuba as the raging fire consumes critical fuel supplies.

Firefighters and specialists from Mexico and Venezuela are helping to fight the blaze in the province of Matanzas with boats, planes and helicopters as they sprayed foam on the containers.

In a statement, the St Lucia-based OECS Commission said it was also concerned at “the casualties and loss of life, and the severe damage caused by the fire, and sympathises with those who have suffered loss, injury or are traumatised by this tragic event.

“The Commission expresses profound sorrow on the sad occurrence, and extends deepest condolences on the tragic loss of life in particular, and wishes a full and speedy recovery to those who were injured. At this difficult time, the Commission assures the Government and people of Cuba of its solidarity and prayerful consideration,” the statement added.

The fire at the Matanzas Supertanker Base has killed at least one person and injured 125 others, with another 14 firefighters still missing. Those injured were treated mostly for burns and smoke inhalation. More than 20 remain hospitalized, with five of them in critical condition.

On Monday, the 15-member Caribbean Community (Caricom) grouping also expressed condolences to Cuba “in this tragic accident brought on by an act of nature”.