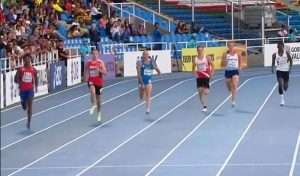 (JAMAICA OBSERVER) – Italy’s Alberto Nonino suffered a nightmare wardrobe malfunction at the U20 World Championships in Cali, Colombia when his genitalia fell out of his shorts while competing in the 400m event of the decathlon.

It is reported that the 18-year-old athlete started well out of the blocks, but he was soon seen repeatedly reaching towards his crotch instead of swinging his arms as he ran down the home straight.

Due to this reaction, Nonino was seen drifting further and further behind his competitors, resulting in the Italian finishing last with a time of 51.57 seconds.

Nonino has since taken to Instagram to show his fury about how the incident, which occurred on the first day of the Championships, has been reported around the world.

“I just want to talk to you a little bit about the rumpus there’s been on blogs and social media in general,” he said in an Instagram Story.

“I’m conscious it was obviously an accident and I’d like to tell you I’m aware of the reaction and you don’t need to send me the links to the blogs out there,” he continued.

“I’m trying to laugh about it now but immediately afterwards I felt terrible and I’m thankful to my friends and family for helping me get over what happened a few hours later. The journalistic world worries about cases of bullying throughout Italy and around the world and then publishes these articles that for a more sensitive person could have done a lot of harm,” Nonino added.

Spanish press agencies have speculated that Nonino’s episode could have been the result of an absence of underwear.