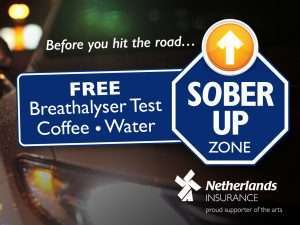 (PR) – Netherlands Insurance is once again actively promoting safe driving by reviving its ‘Sober Up Zones’ at various events this Spicemas season.

The Netherlands Sober Up Zone provides the public – mainly motorists – a designated, safe space to refresh themselves before leaving events. At the Sober Up Zone, patrons are offered coffee, tea, water, light refreshment and a space to rest before heading out on the nation’s roads. The Zone also offers free and safe breathalyzer tests certifiably calibrated to detect any excess to the legal alcohol limit for drivers.

Once again, Bryden and Minors Ltd. and the Grenada Bottling Company have partnered with Netherlands Insurance to bring this road safety initiative to event patrons.

Netherlands Insurance’s Managing Director, Richard Strachan, noted that the Sober Up Zone was first introduced in 2015 after recognizing the value of offering a solution to persons driving intoxicated. Since then, the Sober Up Zone became a welcomed and anticipated feature at events that attracted large crowds and other select events, particularly over festive seasons.

The Netherlands Sober Up Zone was a highlight at PreeDay and will be found at Soca / Groovy Monarch and Biggest White on carnival Friday and Sunday respectively.

“During the festive seasons there is a significant increase in the number of road accidents. We are excited to continue the Sober Up Zone initiative where we play a small but valuable role in promoting road safety for motorists and pedestrians alike. I encourage event patrons to look for the Sober Up Zones before departing the venue”, Mr. Strachan further stated.

Netherlands Insurance encourages motorists and pedestrians to exercise road safety while enjoying the festivities of the season. Remember, do not drink and drive; appoint a designated driver and plan alternative ways to get home in the event you have too much to drink.