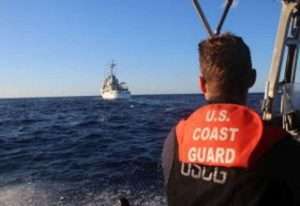 (CMC) – A senior United States Coast Guard official is calling on Haitians to desist from making the “dangerous journey” by sea to the North American country after 109 illegal Haitian migrants were repatriated on Sunday.

The migrants were rescued over the weekend by the US Coast Guard in “a grossly overloaded sailing vessel with men, women and children aboard.

“We are urging families in the US to ask their loved ones not to risk their lives on this dangerous journey,” said Lieutenant Connor Ives, a Coast Guard District Seven official.

“These illegal voyages are always dangerous and often deadly. Anyone attempting to enter the US illegally by sea should expect to be repatriated once interdicted,” he added.

Since October 1, 2021, the US Coast Guard said its crews have interdicted 6,534 Haitian migrants.