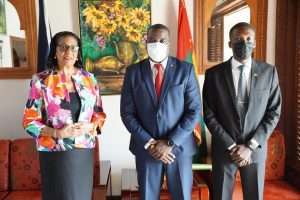 PR –  The first two of three Opposition senators received their instruments of appointment this morning.  The Political Leader, Executive and the entire membership of the party extend congratulations to Senator Norland Cox and Senator Neilon Franklyn.

In a brief ceremony this morning at Governor General’s Residence, Her Excellency Dame Cécile La Grenade congratulated both gentlemen and wished them success in their future endeavors.

Senator Neilon Franklyn said he was extremely elated to have been given the opportunity to represent not just the youth of his home constituency of St. George North West but the Youth of Grenada, Carriacou and Petite Martinique.

Senator Franklyn also stated: “Young people serving is something that I think is important, the New National Party and Dr. Mitchell have once again fulfilled their commitment to ensure a young person has a seat at the table whether in the Lower House or now as we see in the Upper House.”

Senator Neilon Franklyn has worked previously as a Customs Officer and has been a Youth Parliamentarian on both the local and regional scene. He identified Climate Change as one of the keys issues he looks forward to addressing in his tenure.

Senator Cox who will now serve for the third time as a senator, stated his gratitude to his wife and his entire family and the New National Party and Dr. the Right Honorable Keith Mitchell for the opportunity to once again serve the people of Grenada, Carriacou and Petite Martinique. Senator Cox spoke of using his experiences in Government and working along in communities as the catalyst for his input on various issues going forward. He pointed to opportunities for youth in education and employment as important areas he intends to address. Senator Cox has previously served as Parliamentary Secretary in the Ministry of Carriacou and Petite Martinique Affairs and Local Government, Minister of Youth, Sport and Culture and well as Minister of Infrastructure Development, Public Utilities, Transport & Implementation.

The party will announce its third member of the senate in due time.