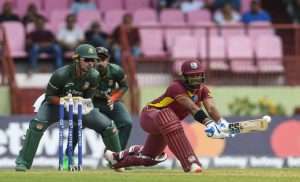 (CMC) – Captain Nicholas Pooran on Thursday stressed the importance of winning the five-match Twenty20 International series against India, as West Indies attempt to bounce back from whitewashes in the one-day format.

The Caribbean side have lost their last four T20I series against India and in fact, have only beaten the Asian powerhouses once in their last 12 meetings on bilateral tours.

Pooran said even though West Indies had produced solid performances in the past, those had not translated into series wins and hoped to alter this trend over the next several days.

“I guess the guys are always up for the challenge against India. They obviously want to show the world what they’re made of as well,” Pooran told a media conference.

“Unfortunately we haven’t been getting series wins and that’s something we want to happen. We just don’t want to perform as players and the team is still losing so looking at this series here, the only thing on our minds is finding a way to be successful,” he added.

West Indies are coming off two straight 3-0 drubbings in the one-day format after losing to Bangladesh in Guyana and to India at Queen’s Park Oval.

And for as much as the T20 format has been long regarded as the home side’s strong suit, they have still only won nine of their last 23 matches inside the last 12 months.

Pooran said it was therefore critical that his side executed in all areas if they were to turn around recent results.

“We definitely want to continue working on getting wickets with the new ball, bowling at the death and from a batting perspective continue to utilise that power-play and form partnerships that can win us games,” Pooran pointed out.

He added: “In order for a team to be successful … everyone has to contribute. Players can have wonderful performances and win games for you but I don’t think we’re all about that. Yes, T20 is a shorter format of the game. It is easier for guys to contribute and we as team need to understand that not every game it’s going to be the same individual that’s going to step. The other guys obviously need to chip in and play their part.”

“I think so far in the first two T20s [against Bangladesh] we started really well. We had that one person standing out with the bat but the other guys chipping in – even with the ball as well,” Pooran went on.

West Indies take on India in the first T20 International at the Brian Lara Stadium starting at 10:30 am (Eastern Caribbean time) before travelling to Warner Park in St Kitts for the next two matches on August 1 and 2, and then wrapping up the series in Florida with the final two games on August 6 and 7.