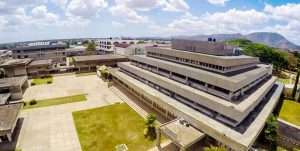 (TT GUARDIAN) – Current and incoming students of The University of the West Indies’ (UWI) St Augustine Campus are elated and relieved that there will be no increase to tuition fees for the upcoming academic year 2022/2023.

On Wednesday, after months of uncertainty, the campus announced that “Chancellor Robert Bermudez has approved a request from the campus to retain current tuition fees for the upcoming academic year.”

The campus added that this would now ease the minds of prospective students who were unsure if they would be able to afford any increase in fees.

UWI management had recommended the fee increase earlier this year, but it was not supported by the Government.

In a media release, UWI St Augustine Campus Principal Brian Copeland sought to encourage those students, saying, “Joining the UWI St Augustine family represents the best value for money, given the fact that its fees are among the lowest and that its degrees are accepted and recognised globally.”

Guardian Media was able to obtain from UWI, a comparative tuition fee sheet that showed that fees per credit at the St Augustine Campus were significantly lower compared to the Cave Hill (Barbados) and Mona (Jamaica) Campuses, particularly with respect to Engineering and Law.

Copeland also added in the media release that “citizens who question the value of a university degree in the current economic climate, should come to terms with the fact that a university education is a lifelong investment.”

President of the UWI St Augustine Guild of Students, Kobe Sandy, said the guild has been adamant and strong in its opposition to the way the increase to the fees were being proposed.

“It would have been disadvantageous to the students because of the uncertainty of GATE, the sharpness of the proposed increase and, of course, the lack of consultation and preparedness for the student body,” Sandy said.

Sandy said they are happy the UWI would have listened and adhered to their advocacy on the matter.

However, he said the guild is not totally in opposition to an increase in the future.

“The guild supports an incremental increase of fees; we support furthering the conversation with the student body going forward on what is expected of us in the next few years to come to improve the state of the UWI and we wish for there to be another impact analysis on how tuition fees impact the student body and how we can make various accommodations to ensure that the students do not feel the full impact if in fact there is an increase in the future.”

Meanwhile, Copeland, in the same media release, announced that after more than two years of remote teaching and learning, the campus will return to face-to-face operations from September 2022, in time for the start of the 2022/2023 academic year.

“Students will have full access to conduct labs, visit the Alma Jordan Library and consult with lecturers. Halls of Residence will resume operations and will welcome students to the Joyce Gibson-Inniss Hall, Sir Arthur Lewis and Canada Halls,” he said.