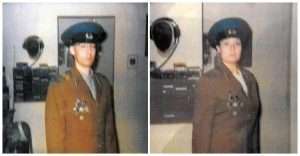 (AP) — A US defense contractor and his wife who lived for decades under the identities of two dead Texas children have been charged with identity theft and conspiring against the government, according to federal court records unsealed in Honolulu.

Walter Glenn Primrose and Gwynn Darle Morrison, both in their 60s, who allegedly lived for decades under the names Bobby Edward Fort and Julie Lyn Montague, respectively, were arrested Friday in Kapolei on the island of Oahu.

Prosecutors are seeking to have the couple held without bail, which could indicate the case is about more than fraudulently obtaining drivers’ licenses, passports and Defense Department credentials.

Prosecutors said there is a high risk the couple would flee if freed. They also suggested that Primrose, who was an avionics electrical technician in the Coast Guard, was highly skilled to communicate secretly if released.

The couple is also believed to have other aliases, Muehleck said.

A lawyer for Primrose declined comment. A bail hearing was scheduled for Thursday in US District Court.

For one family whose deceased child’s name was stolen, the news Wednesday came as a shock.

John Montague, who lost his daughter Julie in 1968 at 3 weeks of age, was stunned to learn someone had been living under her name for so long.

“I still can’t believe it happened,” Montague, 91, told AP. “The odds are like one-in-a-trillion that they found her and used her name. People stoop to do anything nowadays. Let kids rest in peace.”

Primrose and Morrison were born in 1955 and they attended high school together in Port Lavaca, Texas, and then went to Stephen F. Austin University, according to court records. They married in 1980.

There is no indication in court papers why the couple in 1987 assumed the identities of deceased children who would have been more than a decade younger than them. But an affidavit filed by Special Agent Dennis Thomas of the State Department’s Diplomatic Security Service noted that the couple lost their home in Nacogdoches, Texas, to foreclosure that year.

They remarried under their assumed names in 1988, Thomas said.

The couple is charged with conspiracy to commit an offense against the US, false statement in passport application and aggravated identity theft.