The Royal Grenada Police Force (RGPF) is pleased to announce that two of its officers have received top awards in the 2020 Association of Caribbean Commissioners of Police (ACCP) Regional Awards Program for Law Enforcement.

Since its inception in 2014, each year the ACCP and Amalgamated Security Services Limited acknowledge and award top law enforcement officers across the Caribbean Region in three categories.

The ACCP/Amalgamated Security Services Regional Recognition Award Program for law enforcement aims to publicly recognize the outstanding work of police officers and highlight their commitment to serving the public through diligent efforts in making our communities safer, and free of crime, and the fear of crime.

The most recent awards were for the year 2020 for which Grenada captured the Caribbean Top Crime Fighter Award and 1st Runner Up for Caribbean Community Policing Officer Award. 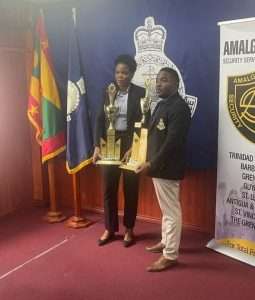 At a brief ceremony held earlier today (27. 7. 2022), at Police Headquarters, Detective Constable Kimber Coutain was honoured as the Caribbean Top Crime Fighter for 2020 and Woman Detective Constable Samekah Farray was honoured as 1st Runner up for Community Policing Officer 2020. A trophy was presented for both categories and a cash award of $5,000.00 USD for the award of Caribbean Top Crime Fighter.

During the award ceremony, Commissioner of Police Mr. Edvin Martin who is also the First Vice President of ACCP expressed the association’s gratitude to Amalgamated Security for their continued support and reorganization of the efforts of Caribbean Law enforcement officers.

Commissioner Martin in his brief remarks stated that receiving these awards speaks volumes and gives testimony to the depth and capacity of the RGPF.  He believes that it will serve as a motivation and impetus for officers going forward. He commended both officers and encouraged continued hard work, commitment, and dedication to duty.