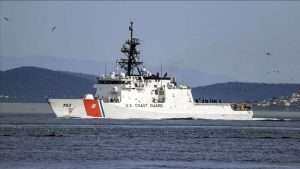 (CMC) – The US Coast Guard says it has rescued 23 Cuban migrants near Marathon, South Florida after their rustic vessel began taking in water and was dangerously close to sinking on Tuesday.

“The Marine Interdiction Agents responded quickly, providing life jackets to the migrants as the rustic vessel sank resulting in frantic attempts to swim or cling to any debris within reach,” the Coast Guard said.

It said the crew swiftly moved to a rescue response recovering migrants from the water and later transferred all 23 migrants to Coast Guard partners for further processing.

“Safety of life at sea for migrants attempting to enter the United States is a priority,” said Tony Arevalo, director of Air and Marine Operations’ Miami Air and Marine Branch.

“Our crews provide humanitarian aid to people who have been travelling for days on unforgiving seas in unsafe vessels. They are often in need of medical attention, floatation devices, food and water,” he added.

On Sunday, 17 Haitians drowned and 25 others were rescued when their vessel capsized off the coast of the Bahamas, which is a frequent transit route for Haitian migrants seeking to reach the United States.

Dangerous sea voyages aboard overcrowded and derelict ships have become increasingly common over the past year as Haitians flee poverty and rising gang violence.