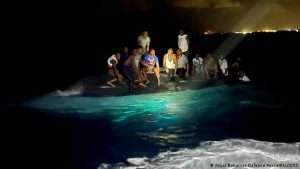 (CMC) – At least 17 people are dead and 25 have been rescued after a boat believed to be involved in a human smuggling operation, capsized just off the coast of New Providence early Sunday.

According to Prime Minister Philip ‘Brave’ Davis, the vessel left a docking facility at approximately 1:00 am (local time), with approximately 60 people on board.

It is believed that the boat – that was heading for Florida, capsized in rough seas.

Davis said that The Royal Bahamas Police Force and Defence Force responded to reports of the boating incident seven miles off New Providence shortly after.

Sixteen of the fatalities were women and the other was a boy of toddler age. It is believed that they were all illegal Haitian migrants living in the Bahamas.

Three of those rescued, including two Bahamian men, were admitted to hospital.

The Bahamians are also in police custody.

Meanwhile, the search is continuing for others who were on board.

The prime minister, who conveyed the condolences of the government and the people of the Bahamas to the families of those who lost their lives in the tragedy, also warned against smuggling operations.

“My government, since the time it came into office, has continually warned against these treacherous voyages. We have increased surveillance on land and sea and intensified patrols. We take this opportunity to strongly condemn the organisation of smuggling operations which risk human life and compromise our national security,” Davis said.

He added that those who were involved in the smuggling operation will face prosecution.

Commissioner of Police Clayton Fernander said the local police are working with the United States Coast Guard, the Defence Force and the Department of Immigration and the survivors are being interviewed.