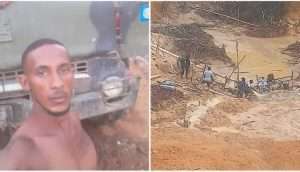 (CMC) – Two men were killed when the mining pit in which they were working collapsed in Region Seven, Guyana.

Police have identified the two dead miners as Troy Scott, 44, and Seon Martin, 32.

In a statement on Sunday, the police said the incident occurred at approximately 3:30pm (local time).

It’s reported that Scott who was employed as the general manager for the mining operations and Martin, were operating in the 25 feet mining pit when it suddenly caved in.

Several other workers, who were also in the pit when it collapsed, managed to escape.

“They then joined and dug Seon and Troy from beneath the overburden by which time they had succumbed,” the police reported.

The bodies were transported to the Bartica Public Hospital on Saturday.

Police said multiple abrasions were seen on both bodies.

The bodies were taken to a funeral home and autopsies are expected to be carried out.