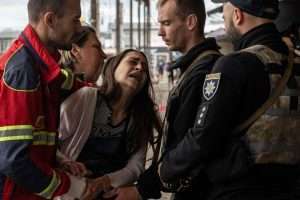 (AP) — Ukrainian emergency workers recovered three bodies from a school hit by a Russian strike in the east of the country, officials said Friday, as attacks continued in several parts of the nation.

The reported casualties follow a barrage Thursday on a densely populated area of Ukraine’s second-largest city, Kharkiv, that killed at least three people and wounded 23 others.

In a rare sign of light, the signing was expected Friday of an accord that would allow Ukraine to resume its shipments of grain across the Black Sea and Russia to export grain and fertilizers.

Beyond that, however, there was no indication of relief from the grinding war. Russia this week has reiterated its plans to seize territories beyond eastern Ukraine, where the Russian military has spent months trying to conquer the Donbas region.

The Ukrainian president’s office said that in Kramatorsk, in Donetsk province, Russian shelling destroyed a school and damaged 85 residential buildings.

Ukraine’s state emergencies agency said it has completed work at the school, which was hit on Thursday, and found three bodies.

“Russian strikes on schools and hospitals are very painful and reflect its true goal of reducing peaceful cities to ruins,” Donetsk Governor Pavlo Kyrylenko said in televised remarks, repeating his call on residents to evacuate.

Russian Defense Ministry spokesman Lieutenant Genernor Igor Konashenkov, however, said that the Russian strike had killed over 300 Ukrainian troops who used the building of School No. 23 in Kramatorsk as their base. He said another strike destroyed a munitions depot in the industrial zone of the southern city of Mykolaiv.

Konashenkov also said that Russian forces destroyed four HIMARS multiple rocket launchers supplied by the US between July 5 and 20. The US said it has supplied 12 HIMARS systems and will deliver four more.

The claims could not be independently verified. A senior US defense official, who briefed reporters on condition of anonymity in line with department rules, said Thursday that Russia hasn’t yet taken out a single HIMARS system but it is likely it will “get lucky” and do so at some point.

The Ukrainian military has used HIMARS, which have a higher range and better precision compared with similar Soviet-era systems in the Russian and Ukrainian inventory, to strike Russian munitions depots and other key targets.

Regional governor Valentyn Reznichenko decried the “senseless” attack, saying that “there are no military goals behind it and this shelling could only be explained by their desire to keep people on edge and sow panic and fear.”