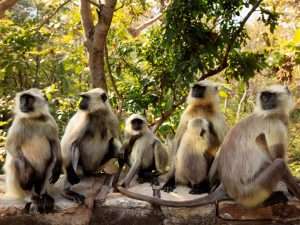 (JAMAICA OBSERVER) – A troop of wild monkeys in India stole a baby from his father and tossed the boy from a third-story rooftop, killing him instantly, reports said.

According to reports from a media outlet in India, the infant’s father, Nirdesh Upadhyay, 25, and his wife were on their rooftop with their 4-month-old son last Friday in Bareilly when several monkeys attacked them.

Upadhyay’s wife managed to escape the monkeys, but the troop cornered him. One of the animals grabbed the boy and tossed him off the rooftop, the outlet said.

An investigation into the deadly incident is reportedly underway.

It is reported that the enraged monkeys also attacked other relatives in addition to the boy’s father when they tried to intervene.

The dead boy is survived by his parents and one sibling. The family had been prepping for the child’s naming ceremony when the fatal attack occurred, reports indicated.