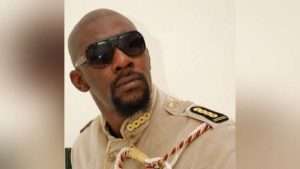 “When you’re doing something, and you’re not getting the appreciation, it will affect you,” Hart said. “We anno carpenter boss, we are creating music, and so you get reluctant to do things, you don’t have no energy anymore and you turn to drinking, the only thing he was resigned to was drinking.”

He said Merciless was depressed and had migrated overseas because of ‘the fight’.

“He ran away to America, he came back to Jamaica because he got a little deportation. But he left Jamaica because he was depressed. This is our culture, we work so hard for it and people don’t appreciate what we’re doing here, everything was a major fight; one time, even artistes didn’t want to voice any dubplates for Stone Love because dem say Stone Love play too much Merciless,” Hart said.

GADAFFI… says he was devastated by the news of Merciless’ death.

“He wanted the ratings, he wanted the appreciation, he did all the hard work. He put in the work. He died from a broken heart for the lack of acknowledgement for all the works he put in, and he turned to drinking,” Gadaffi said.

Merciless, who was from Clarendon, was doing gigs at several Corporate Area studios. The 51-year-old artiste was last seen alive around midnight; he was found dead in his room Tuesday afternoon. No foul play was suspected.

“Ah the rum and (an energy drink) mix up do it, is two caffeine together, you know how much people dead from it,” a devastated Gadaffi said.

“He was so stressed out, so I am appealing to the industry to rate real talent. Don’t wait until they’re gone to play their songs, you can save lives…he was so passionate about his craft, he was under-rated by many, the industry never gave him the push he needed,” he said.

Gadaffi said he hasn’t slept much since hearing the tragic news.

“He is my artiste and I love him. All now I am crying because I feel it in my heart because I love him so much. Big up Bounty Killer and Beenie Man for doing combinations with us, because dem see the talent. Bounty Killer did a song called ‘No One Cares when Gunshot Buss’, and he did ‘Mama’ with Beenie Man

He said he has been devastated by the news.

“Yesterday, when I got the news, I was driving, the man dem say pull over because I was seeing darkness in front of me, so everybody knows where I am coming from, condolences to his family, and I know his soul is in Zion,” he said.

Gadaffi said he has over 200 hundred unreleased Merciless songs.

“I have 268 songs with Leonard on my tape. One time, when he did Sting, Greensleeves gave me 60,000 pounds to do an album but by the time the album was to come out, Greensleeves sell it out to VP records, the album did not even come out. He doesn’t have no proper album on the road, Jetstar put out his ‘Merciless’ album when he just came out,” Gadaffi said.